The Last Stand of Shazeb Andleeb

“Oddly enough… I was just writing to a friend about this. I was wondering if there were any articles on Shazeeb, so I googled his name and came here.

I was there that day. It happened in front of the career center during “nutrition”, as was stated. I was 10 feet away around the corner, the bell rang, and we lingered a little while, talking and laughing about something or other, completely unaware of what was happening on the other side of the building.

I did finally notice something was wrong, the odd silence of everyone, no one moving… I turned around and there he was. One of my teachers, who was also a life guard, was already performing CPR. I’m not lying when I say that the world went slow motion. It was so quiet right there… but I could see his sister there crying, and his friend Farrah, who I had known for years… I could see them but I couldn’t hear them. I looked back over as the school nurse went to Shazeebs side to help. My teacher looked up, and right at me… I knew by the look in his eyes that he wasn’t going to make it. A school official started yelling to move, and broke the silence… everything moved again.

I went to class. We sat in shock.

Our teacher had him in another class, and over the next week… he slowly found out all the details of what had happened and why he was attacked. It wasn’t race related. Shazeeb was a good kid. He stayed behind a year so his sister wouldn’t be alone in school. He was planning a graduation party… thats how it all started… a guest list. One of his attackers was sitting next to him in class while Shazeeb wrote a list of people going to the party… The other boy grabbed the list and wrote the name of his “crew”… Shazeeb snatched it back, and crossed out the name of the “crew”. The other boy took it as a dire insult. Confrontations ensued for the week before the attack, just stare downs… that were broken up by teachers. The other boy and his crew started planning to jump him… And they did.

Shazeeb was there with his sister and his friend Farrah… The group of boys ran up… knocked him down… stomped on him… The girls tried to help, they were flung away, one girl knocked into the locker… The attack lasted no more than 10 to 15 seconds.

I blamed myself for years. I wondered what would have happened had I turned that corner sooner… and not loitered. I felt responsible. I knew him only by passing him on the way to class, shared glances, a smile… I wished I had gotten to know him better, I felt guilty that I’d never have the chance.”
S. (21-XII-2006) 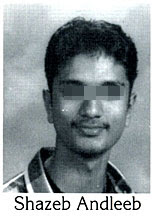 Two former students at Narbonne High School in Harbor City were sentenced to prison Tuesday for the fatal beating of a 17-year-old classmate who crossed off the initials of their tagging crew from a party list.

Christian Bremmer, 19, of Lomita received a six-year term and Rene Nieves, 19, of Harbor City got 11 years because he acted more violently in the May 18, 1995, attack that killed Shazeb Andleeb, said Deputy District Attorney Ann Ingalls.

Long Beach Superior Court Judge Richard Romero handed down the sentences following plea bargains the two men reached with Ingalls when they unexpectedly pleaded guilty on the second day of their murder trial.

The pair were convicted Sept. 24 of voluntary manslaughter for beating and stomping Andleeb to death after he crossed off the initials of their tagging crew from an end-of-the-year party list he was compiling.

Four other Narbonne students also were charged with the slaying. Because they were younger than 18, all were tried in Juvenile Court and eventually pleaded no contest. They were sentenced to one-year terms in county probation camps.

A fifth defendant, who also was tried as a juvenile but turned 18 during the hearings, also pleaded no contest and received an indeterminate term in the California Youth Authority.

Andleeb died of head and neck injuries inflicted during the attack on campus.

The parents of the 11th-grade student moved to Toronto, Canada, shortly after burying him at Green Hills Memorial Park in Rancho Palos Verdes.